Broken Into Something New

Intern Evan shares the story of how Derrick Lail went from a rising star in law enforcement to transforming lives in the midst of brokenness. Even his own.

Derrick Lail has to constantly remind himself where he started on his journey.

Weights slam off the mats. Barbells vibrantly ring. Bodies flop onto the floor with muscles shrieking in agony. Heavy breathing keeps in rhythm with elevated heartbeats like a symphony. Drops of sweat relentlessly trickle down each face, each stream on a mission to scorch the eyes.

The body frantically bargains with pain for any ounce of relief. Worst of all, it’s only been a hot minute into the workout. There are still 19 minutes left.

You can say this is the normal workout for CrossFit, although, it can be worse. Much worse. The workouts are designed to maximize the expenditure of energy through blending various fitness regimes such as weightlifting, interval training, aerobics, and even acrobatic exercises.

Athletes are challenged to the point of physical exhaustion, however, the real battle is fought within the mind. It is a standoff where comfort and pain duel to a victor. Gee-whiz that sounds brutal. Who would want to do such a thing, right?

Broken Crayons Still ColorDerrick Lail is one of the masterminds in Boone who is in the business of crafting these rigorous workouts. He is the owner of a local gym he established in January 2015. This has led to him recently launching a non-profit that serves those who are battling addictions.

"My dream for the gym went beyond the improvement of the individual’s health and fitness," Derrick said. "It serves as a platform to sharpen iron, to build community, and to develop leaders."

Derrick admits that he did not want to create a place where individuals simply fit in. Rather, he wanted to create a culture where people belong. "As humans, we relate to each other through our brokenness," he explained. This realization has led him to adopting the mantra, "broken crayons still color."

Brokenness is a plight that plagues humanity, yet it also paradoxically unifies us. It builds our resiliency and our sincere need for each other. Derrick aims to connect individuals by our falls in order to build a positive and accepting atmosphere. So why does he emphasize community and brokenness so much?

"The Lord is near to the brokenhearted and saves the crushed in spirit."–Psalm 34:18

Before we jump forward, we must trace back through his path.

Derrick graduated from App State with a bachelor's degree in Criminal Justice in 2006. He then moved to the Queen City, Charlotte, in hopes of working for the FBI.

His career started as a local police officer, where he served as a task force agent on the federal and felony level. He hunted, apprehended, and investigated many crimes revolving around home break-ins. Derrick was the cream of the crop of case agents.

He possessed all the right traits to be a great success. He had the diligence, the intelligence, the tenacity, the charisma, and most importantly the youth. He blazed through the ranks. He earned multiple awards. At one point even the chief of police called Derrick seeking advice about a case. Derrick was on track to being a captain on the force and to a promising career. So why would he leave his job?

Quite simply, he started to realize that his career was becoming his identity. The job he seemed poised to own started to control him. "The job required more and more of my time," Derrick said. "It took me away from my family and my true mission."

Then in an instant, everything changed. Derrick suffered an injury on the job that became a turning point of his life.

Derrick was working an undercover case when he apprehended a suspect. Trying to wrestle his suspect into submission, the suspect reached for Derrick’s gun. Fortunately, for Derrick, his fellow officer darted onto the scene just in time. He tackled both Derrick and the suspect, slamming them both onto the cold, hard cement.

The collision dislodged a disc from Derrick's vertebrae causing an excruciating amount of pain, the lingering effects of his injury still plague him to this day. Derrick’s department would not cover the cost of back surgery claiming it was the result of wear and tear from high school football.

Ultimately, it was the final straw for Derrick. His injury coupled with his desire to more fully live out his true calling led Derrick to leave law enforcement and explore new opportunities.

Derrick emerged from the shadows of undercover work to teach criminal justice at the University of North Carolina–Charlotte. He also dedicated himself to getting himself into the gym in order to rehabilitate his back and strengthen his core.

A self-professed "gym rat," Derrick frequently met up with a group of guys at the gym during the week to pick up and put down heavy things. Over time Derrick said a community formed “to help each other, check on each other, kind of like iron sharpening iron."

"As iron sharpens iron, so one person sharpens another."–Proverbs 27:17

Then one day someone personally handed Derrick an envelope with $1,000 for express purpose that he promise to use it to earn a trainer's license. Apparently, this person was inspired by Derrick and how he had used fitness to create a welcoming environment of community. Derrick used the money to get his Level 1 CrossFit certification.

But he would not use his certification for another two years. After a year of teaching at UNCC there was an opening at Derrick's alma mater in the criminal justice department. He and his family couldn't resist the opportunity to live in the mountains. So they moved back to Boone where Derrick would end up teaching at App State for four years. During that time Derrick would earn a Master's Degree as well.

In 2015, Derrick fulfilled his promise to be a certified CrossFit coach when he raised the garage doors of his new gym. Derrick was officially welcoming anyone ludicrous enough to grind out the grueling workouts.

That’s how he got here. And the mission of his gym is deeply rooted in the conversations Derrick has had with criminals he encountered in his past life. These discussions revealed to Derrick more and more layers about brokenness in humanity.

Derrick vividly remembers bringing in a 16 year old boy for a crime he had committed. Derrick told him he could go to prison and the boy grunted, “Man, prison is just another place for me to sleep.”

The frank remark baffled Derrick, “the teen already made up his mind on what he’ll ever be.”

Derrick has questioned and investigated so many others like this boy. And it got him thinking about why all of these people commit crimes. Derrick identified a pivotal mindset in each. 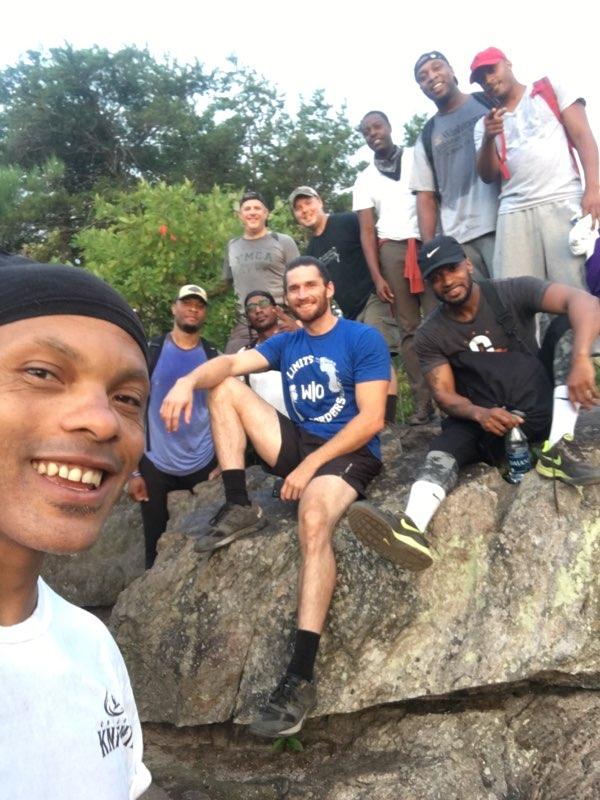 His encounters with these individuals significantly shaped his mission and the vision for his gym and non-profit.

I found Derrick to be a man on a mission of equipping others to be capable leaders in their social spheres. He is a man willing to open the doors for the weak, the broken, or the lost.

"Your brokenness makes you better poised to serve other people," Derrick said. "Because you can connect with them in their broken times as a result of what you've learned for yourself."

Heck yeah the workouts leave everyone gasping for breath. Yet the community Derrick has created behind these garage doors makes it all worthwhile. And you come away from the whole experience finding the air around you tasting a bit sweeter.

Steal Back Your Smile